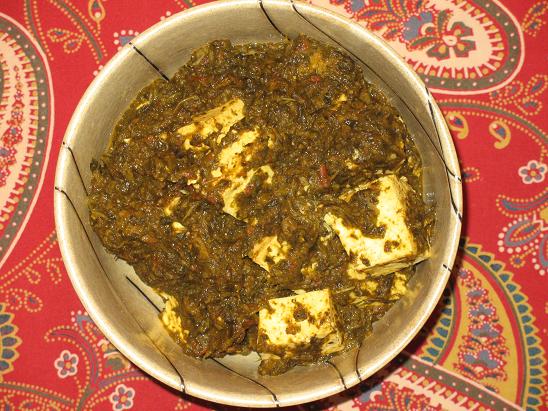 This is the basic palak paneer recipe. I changed it up a bit by adding cilantro and dill to the spinach mixture. It gives it an amazing earthy flavor…

Palak Paneer is cooked in several different ways. Restaurants tend to make it quite rich with lots of butter and cream. In the homemade versions the paneer is fried. I have tried to make mine as simple and healthy as possible. I don’t think there is any need to fry the paneer, soaking it in water makes it very soft and spongy and it absorbs the spinach flavor well. It is a little time consuming but the result is worth the extra work. I grew up with this dish in Delhi, having all different versions of it. I like my mom’s the best and this is very close to hers.
I like eating Palak Paneer with some dal (check out the masoor dal recipe) and roti/naan. Beer goes nicely with Indian food, but since I am more of a wine drinker, I go for a crisp Riesling, Savignon Blanc, Rose or Champagne!

Cut the paneer into two inches squares and place in a medium bowl with water to cover the cheese. Let the paneer soak in the water for at least 2 hours. This makes the cheese nice and soft for consumption.
In a large saucepan, heat the olive oil with the cumin seeds. In the mean time blend the onion, garlic, ginger and cilantro into a paste- don’t wash the blender, we will re-use it for the spinach. Once the cumin begins to sizzle, add the onion mixture. Saute this mixture on medium heat for 10 minutes stirring consistently. Then add the crushed tomatoes, coriander powder, garam masala, turmeric and cayenne pepper. Saute for another 10 minutes stirring well. On the side, blend the thawed spinach in the same blender. Add the blended spinach to the tomato mixture and cook on medium heat for at least 15 minutes or till the water (from the spinach) has evaporated. Add the half and half and the drained paneer. Cook for another 10 minutes on low heat with the lid on. Adjust seasoning and serve.

Hi Monica,
I love this dish. Thanks so much for bringing some for me to try! Now I will have to try to replicate this. It does not sound too difficult…
Ruth

What an appetizing dish, wish I could partake of it, right now!!

Hi Monica, this dish is just the best. Its easy to make. I used the frozen spinach and canned tomatoes. The paneer was hard to find, but Whole Foods had it at the Indian Food shelf. I ate it just with rice and the next day with plain potatoes. It is filling and delicious and I will make it soon again.I will bring some over to Ruth.