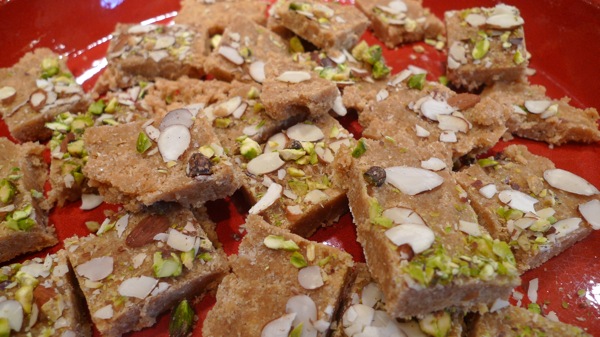 Here is one of my favorite Indian sweets! Happy Diwali! Enjoy..

Heat a medium frying pan and add the coconut oil. Add the besan and sauté on medium heat for at least 30 minutes (or more) till the mixture turns a light caramel color.
Add the ricotta, coconut and cardamom seeds. Mix well and let the moisture from the ricotta cook out- about ten minutes.
Turn the heat off and add the sugar. Mix well until all is incorporated.
Spread the mixture on to a shallow platter with edges. Smooth with a spatula and sprinkle the almonds and pistachios and press down with fingers. Keep in fridge for half an hour to set. Take out and cut into small squares and serve. 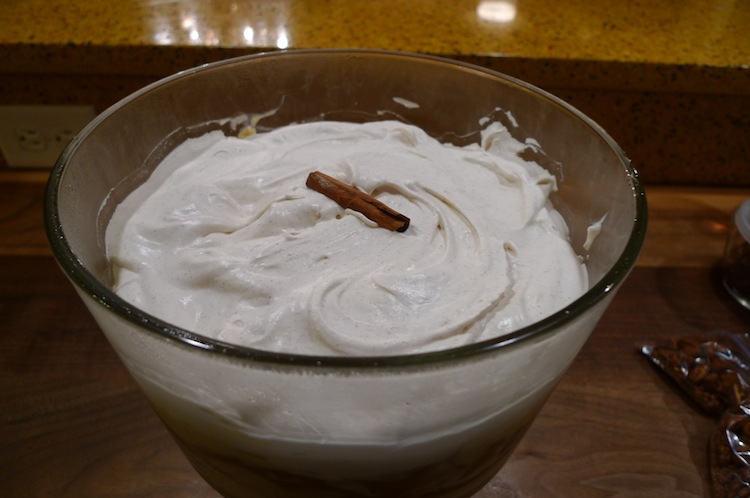 I thought I would do a bunch of desserts for the upcoming holidays.. this is one of my favorites…

Place the butter in a large frying pan. Add the apple pieces, cinnamon stick, cardamom seeds and sugar. Stir constantly until the butter melts on a medium heat. Add the cider and lemon juice and bring to a boil. Lower the heat and cover with lid for ten minutes or till the apple pieces are soft but not mushy. Bring to room temperature and refrigerate. Take out of fridge a few hours before assembling. Divide into two portions.

In a medium saucepan, heat the milk and vanilla bean to a boil over medium heat. Immediately turn off the heat and set aside to infuse for 10 minutes. In a bowl, whisk the egg yolks and granulated sugar until light and fluffy. Add the cornstarch and whisk vigorously until no lumps remain. Whisk in ¼ cup of the hot milk mixture until incorporated. Whisk in the remaining hot milk mixture, reserving the empty saucepan.
Pour the mixture through a strainer back into the saucepan. Cook over medium high heat, whisking constantly, until thickened and slowly boiling. Removed from and heat and stir in butter. Transfer to a storage bowl. Cover with plastic wrap to eliminate skin forming. Refrigerate overnight. Divide into two portions.

Assemble the trifle by starting with a layer of pound cake at the bottom. Cover with one portion of the apples and then the custard. Repeat the process one more time and top with cinnamon whipped cream. Refrigerate for at least 4 to 5 hours before serving.

I make this dish all the time. I do like to change it up a bit- just to make it more interesting. For this one I first combined green onions, garlic and cilantro and used them as the base. I then used cardamom, cloves and cumin to flavor the dish- the result- absolutely delicious!!

Process the aromatics in a food processor until they are chopped fine. Keep aside.

Heat a heavy saucepan with the olive oil. Add the cumin seeds, cardamom pods and cloves and cook for 30 seconds over medium heat. Add the pork and increase the heat to high. Break the meat with the back of a wooden spoon while browning it, for about 3 to 4 minutes. Add the tomato paste and cook for 30 seconds. Add the cauliflower, salt, ground coriander, turmeric and cayenne pepper. Mix well and cover with lid and lower heat to medium low. Cook for 15 to 20 minutes and take lid off. Break the florets into smaller pieces with the back of a wooden spoon and cook on medium high heat for another 5 to 10 minutes, stirring constantly. Check for seasonings and garnish with cilantro. 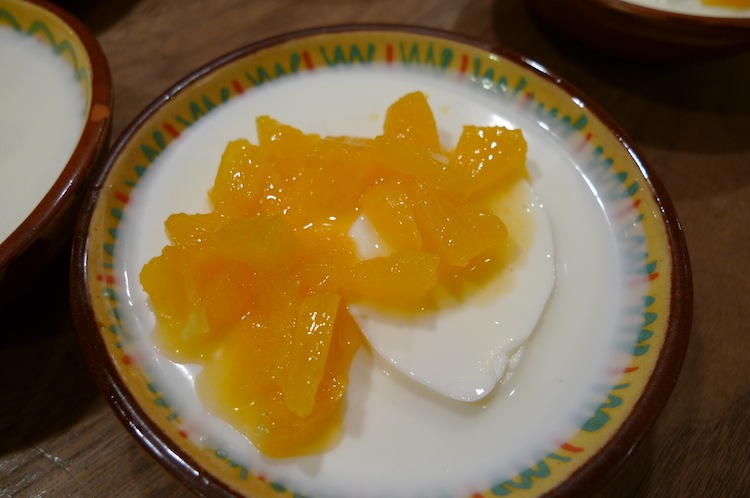 I have decided to do all desserts this week in honor of Valentines day. I may disappoint all the chocolate lovers out there.. most of the desserts are fruit based- something different for V-Day!

I love any custardy dessert…I find them very comforting. This panna cotta is comforting and healthy at the same time. I have used cream, which can be substituted with all milk. Either way, this dessert is delicious, especially topped with fresh chopped oranges.

Add the milk to a small bowl. Sprinkle the gelatin and let sit and absorb.

Add the milk, cream, cardamom and agave to a medium saucepan and simmer without boiling for 4 to 5 minutes. Turn heat off and add the gelatin mixture. Whisk well to make sure the gelatin dissolves. Add the vanilla extract and yogurt. Taste and add more agave if needed.
Pour into small bowls and refrigerate overnight. Make sure to cover with plastic wrap.

Add the chopped orange segments to a small bowl. Add the vanilla sugar and let sit for an hour. Top the panna cottas with the topping before serving.