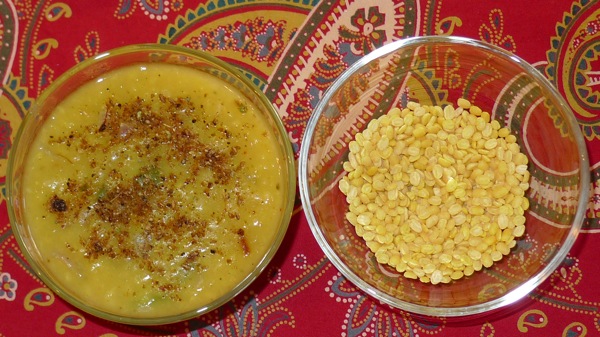 This is the most popular lentil dish on my Dad’s side of the family. I grew up eating it all the time- to the point that I don’t like to make it very often. Actually I do make it once in a while but I never  the way my Mom does.

She would cook the lentils in water, turmeric and salt. Sauteed onions were the most important part of the tempering. They were chopped and cooked on a medium fire with ghee until they turned chocolate brown. The lentils were topped with the onions and garam masala was sprinkled on top- thats it – that is how it was made every single time. Part of me understands looking forward to the same dish, made the same way every time- I do that- I have the same breakfast every day. Somehow with these lentils- I want a change but as you probably noticed, I did sprinkle the garam masala on mine as well- I love the flavor and it finishes the dish off really well.

I like making it with ginger while the lentils are cooking and then topping it with an onion and chili. It is quite similar to the one I grew up with but still a bit different. It is great with rice or as a side dish with a vegetable or a meat. It is even great as a soup!

Add the dal, water, ginger, salt and turmeric to a medium deep pan.
Bring to a boil and lower the heat to medium. Stir occasionally and cook till the lentils
are soft not too mushy, about 10-12 minutes.
In the meantime in a small frying pan, heat up the olive oil and add the onions and serrano chili. Stir and cook on medium heat till the oinions are golden brown. Add the onion and chili mixture to the lentil pan. Add the garam masala and cayenne pepper. Taste for salt. Serve with rice.