Juice on half a lemon

Salt and pepper to taste

Puree all the ingredients, except the olive oil, salt and pepper, in a food processor until a paste is formed.

With the motor still running, stream in the oil until a smooth consistency if formed. Season with salt and pepper and serve. 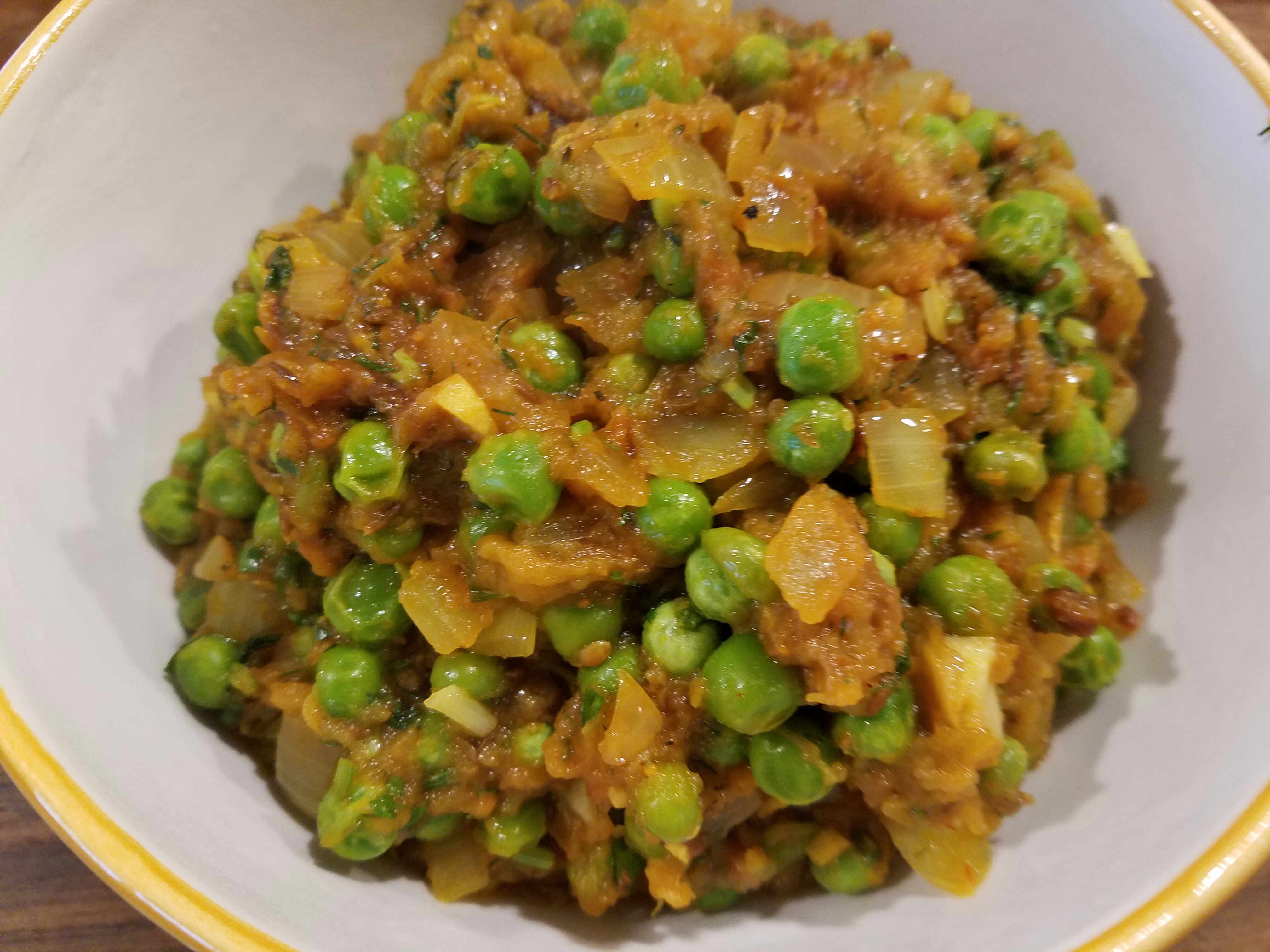 Place the eggplant on to a grill or under a broiler. Char the skin from all sides, making sure the eggplant is nice is tender once done- about 10 to 15 minutes. Keep aside and let cool, take skin off and mash with a fork.

Spread the olive oil all over the eggplants and place under a high broiler. Roast until the eggplants are soft and skin is charred and dark brown. Take out and peel the skin off. Take the pulp out, break it apart with a fork and keep aside. 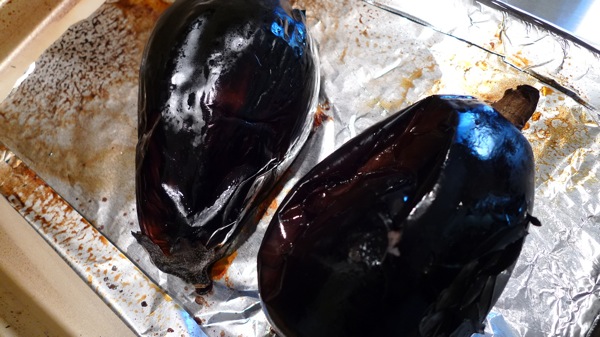 This is a yummy dish for meatless Monday. It has delicious roasted eggplant flavored with mint, cinnamon, tomatoes and feta. It is a great side dish or a dip with warm pita bread!

Place the sliced eggplant on a cookie sheet, drizzle with oil and sprinkle some salt. Broil under medium heat turning the slices once till both sides are golden brown- about 10 minutes. Take out of oven and keep aside. 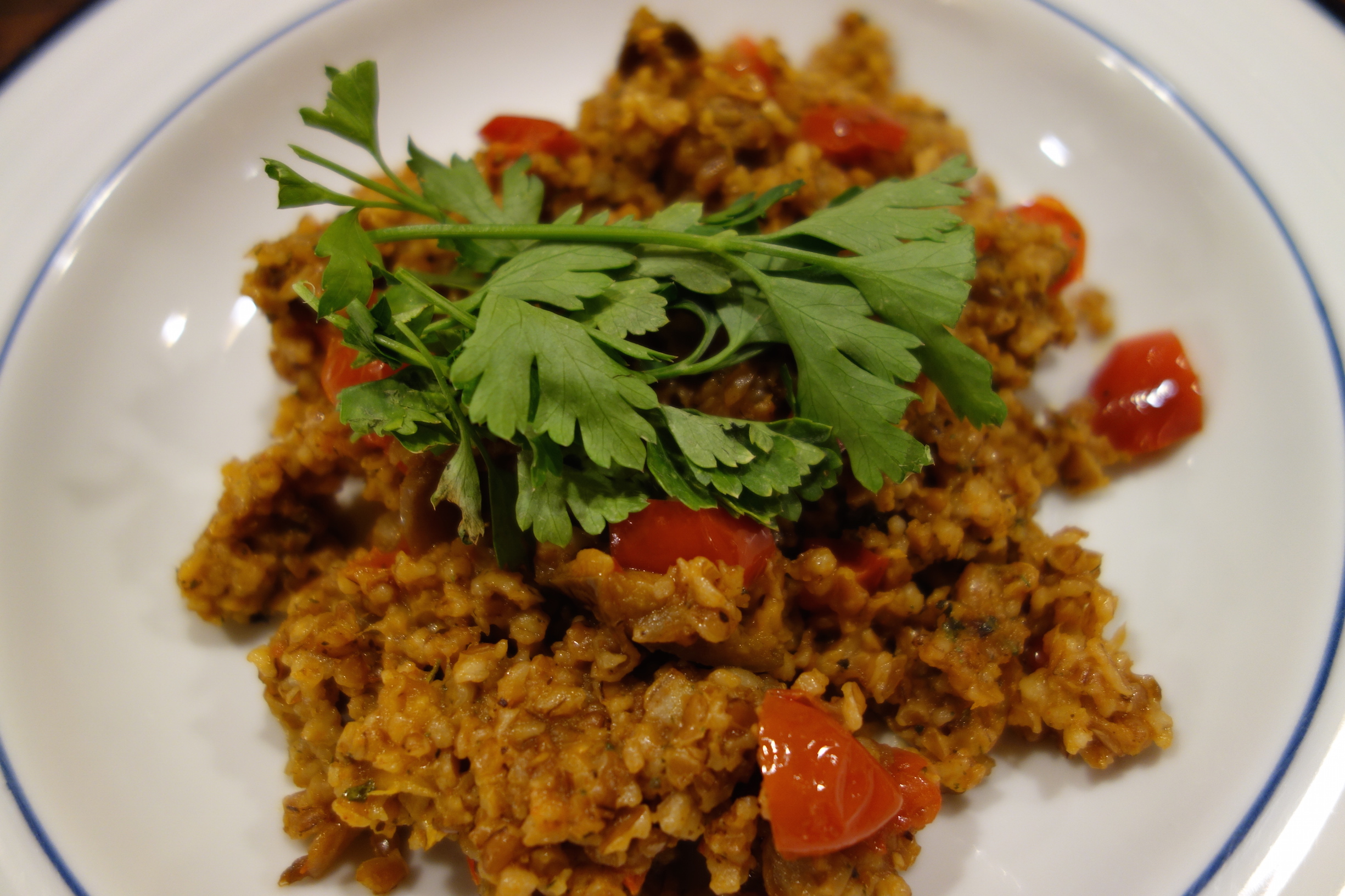 This is a perfect accompaniment for the kebabs from yesterday’s post. I added delicious red pepper and eggplant to the grain and included harissa which is a Moroccan spicy condiment. It was a delicious dish!

Heat a large saucepan with the olive oil. Add the onion and sauté for 2 to 3 minutes on medium heat. Add the harissa and tomato paste. Saute for another 2 to 3 minutes.  Add the red pepper, eggplant and jalapeno. Saute for 3 to 4 minutes. Add the tomatoes, mix well and simmer on a medium low heat, covered for about 5 minutes. Take the lid off and add the bulgur and sauté for 3 to 4 minutes. Add the hot water, bring to a boil and simmer, covered for 15 minutes. Turn the heat off and let the bulgur rest for 20 minutes. Take the lid off, fluff with a fork. Add salt and dried mint. Check for seasonings. Serve warm.

Day three started with some wind, rain and a delicious Turkish breakfast. We bundled up and headed to the Topkapi Palace, which was walking distance to our  hotel. We spent a few hours viewing the Blue Mosque and the Palace. Somehow walking around in museums, etc makes me hungry. We came out and immediately started looking for somewhere to warm and eat. On the way, we found a vendor selling crispy potatoes. He had a machine to cut the potato open onto a stick. He then fried the whole thing and sprinkled it with spices and salt- it was delicious! We stood there for several minutes devouring many sticks of potatoes. 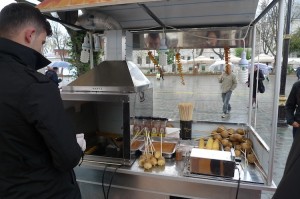 We also had some of the Turkish pretzel again- this one was not as crispy and fresh as the other one. We finally found a restaurant/cafe and ate some kebabs and lavash and drank some buttermilk.

We then headed to do some shopping. They have beautiful ceramics, rugs and stoles all over Istanbul. The trick is to bring the prices way down by haggling with the vendors- which is a skill I don’t possess but I think I held my own as I shopped.

After a few hours of rest, lots of research, we headed to a restaurant near our hotel called Tria. As we were 9 of us, we decided to order family style and instead of an entree each, we ordered lots of appetizers. They started us off with baskets of lavash, black olives and olive tapenade- delicious! 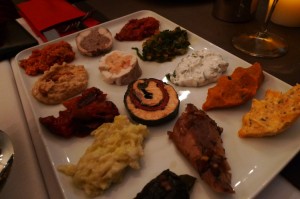 We ordered their house red wine which was also delicious. The wine I have had so far has been quite yummy- the problem is that alcohol is not served in the very down to earth eating joints- which is where I like to eat when we travel.

The appetizers kept coming- a plate of meze, which is like eating Turkish tapas. It consisted of lots of interesting things like grated eggplant in a white sauce, lentil kebab, tomato sauce with a kick, a fresh cheese spread, some kind of grilled fish, etc. The grilled squid was yummy as well! We were quite full and satisfied when the grilled lamb over mashed eggplant arrived. I was a bit skeptical about the mashed eggplant- but it was by far the most delicious thing on the table. It was soft, velvety and delicious!  Believe it or not we were too full for dessert!

We decided to walk some family members to the tram station which was near our favorite dessert place.. somehow the walk made the idea of dessert more palatable… so we strolled over and sat down for a few sweet things..

Tomorrow, we are off to Cappadocia!!