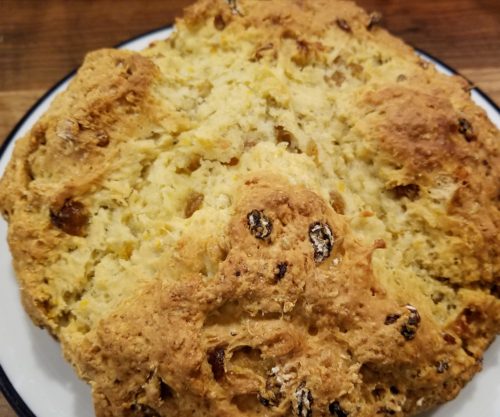 Transfer the flour, sugar, salt and baking soda in a mixing bowl, whisk together. Add the butter and mix briefly with fingers, incorporating the butter. Add the raisins mixture, zest and fennel seeds and mix well. Mix the buttermilk and egg together in a small bowl and whisk well and refrigerate until needed (the key is to have this liquid as cold as possible) Add the liquid slowly to the dry mixture while mixing it with a fork. Once all the liquid is incorporated, gently mix everything with your fingers and form an 8 inch round loaf and transfer to the cast iron skillet or cake pan. Mark the top with an ‘X’ with a knife about ½ inch deep.
Bake for 20 minutes in the oven and check if the top is getting too brown. If it is, then top with aluminum foil and bake for another 20 to 25 minutes. Take out of oven and keep the foil on till it cools off. 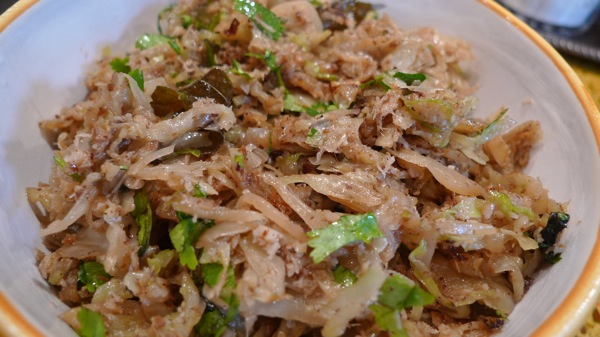 Roast the seeds in a small cast iron skillet on medium heat for 3 to 4 minutes or till the seeds are aromatic. Take off the heat and grind in a spice grinder. Keep aside.

Heat a heavy saucepan with olive oil. Add the shallots and ginger. Saute 1 to 2 minutes on medium heat. Add the curry leaves and coconut. Saute for 2 to 3 minutes on medium heat, stirring constantly. Add the cabbage and turn the heat up. Saute for 3 to 4 minutes, stirring constantly. Lower the heat and cover with lid. Cook for 15 to 20 minutes, stirring every five minutes. Add salt and check for seasonings. Add cilantro for garnish and serve warm. 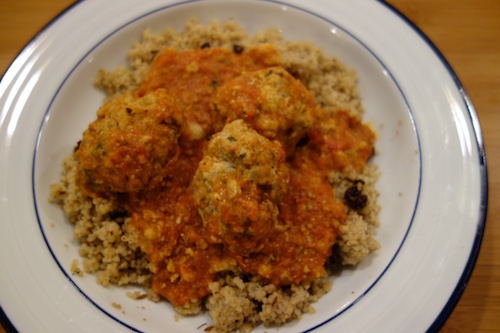 This is a great take on your regular, run of the mill, meatballs- not that any thing is wrong with that… but sometimes it is nice to change it up a bit…. they are really good to entertain with… I served mine with delicious couscous…

Mix all the ingredients and set aside for at least an hour.

Heat a heavy saucepan with the oil. Add the tomato paste, fennel seeds, ground cumin, cinnamon and orange zest. Saute on medium heat for a minute and add the tomato sauce and the saved orange juice. Bring to a boil and simmer on low heat with lid on for at least 45 minutes, stirring every 15 minutes or so. Take lid off and increase heat and form meatballs and drop gently into the pan. Lower the heat to a simmer with the lid on and cook for 30 minutes. Check for seasonings and add salt. Serve on top of couscous topped with yogurt sauce.

Mix all the ingredients and check for seasonings. Serve with meatballs. 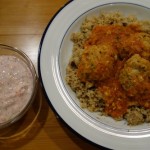 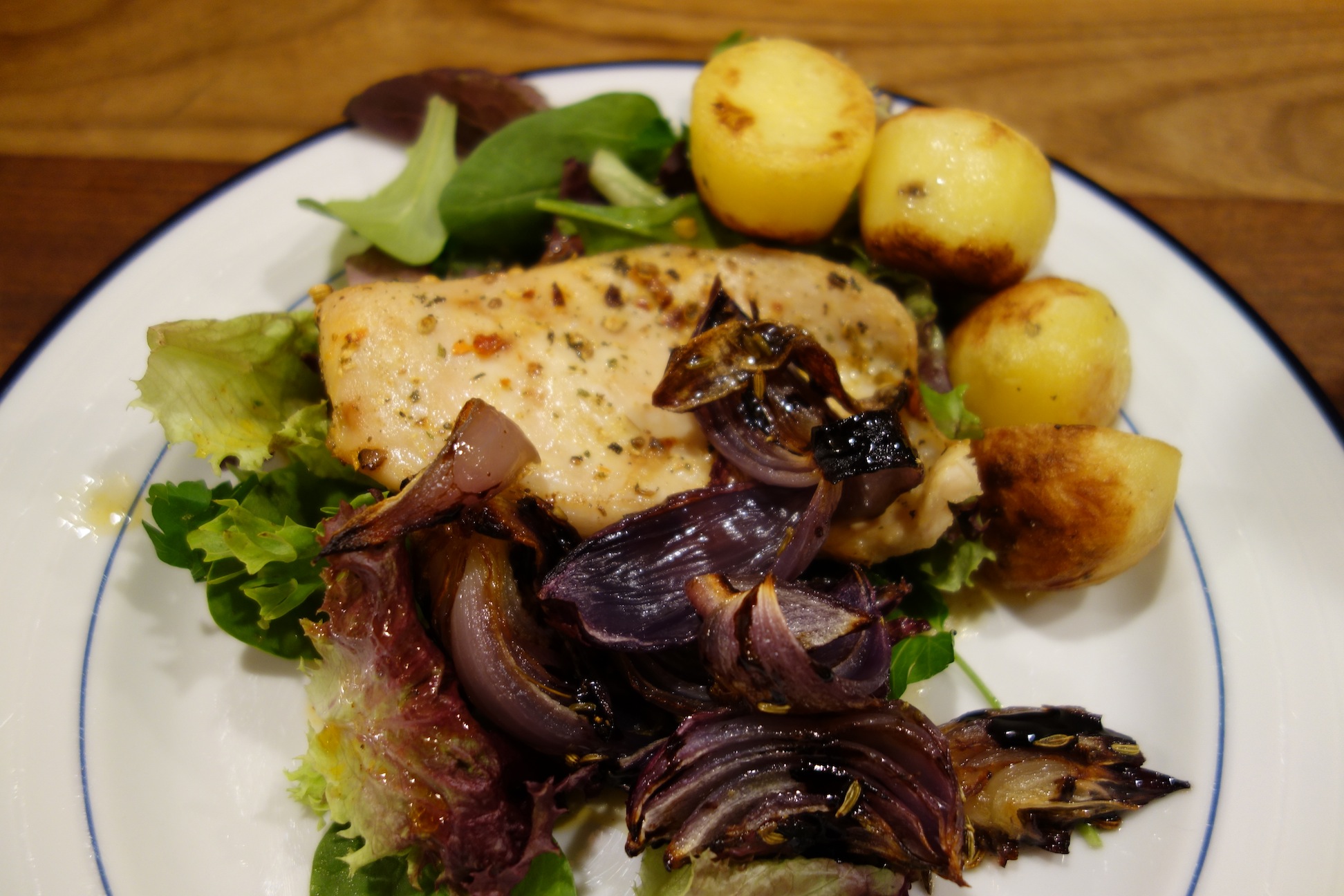 I served this side dish with the chicken yesterday. I saw a Nigella Lawson show where she made a side dish with roasted onions. She served lamb chops for dinner with these yummy onions…

Transfer the onions to a lined oven pan. Add the olive oil, fennel seeds, salt and red pepper. Mix well and roast in the oven for about 40 minutes or till the onions are soft and caramelized. Take out and drizzle with balsamic glaze. Serve with chicken and potatoes.

Cauliflower with Ginger and Onion Seeds 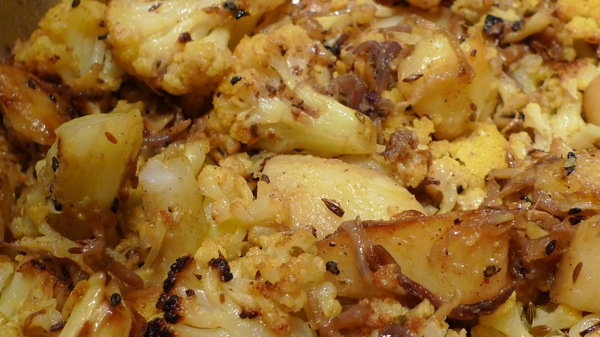 Place the cauliflower florets and potatoes on a lined cookie sheet. Drizzle oil and sprinkle salt all over. Broil till golden brown, about 10 to 15 minutes. Take out and keep aside.

In a wok like saucepan, heat the olive oil. Add the cumin, fennel and onion seeds. Saute for a minute on medium heat till the sees begin to sizzle. Add the onion and ginger. Saute for 4-5 minutes stirring constantly. Add the broiled cauliflower and potatoes. Add the salt, turmeric and cayenne pepper. Mix well and cover with lid. Cook for 10-15 minutes or till the potatoes are soft. Uncover and increase the heat. Add the garam masala and stir well. Check for seasonings. 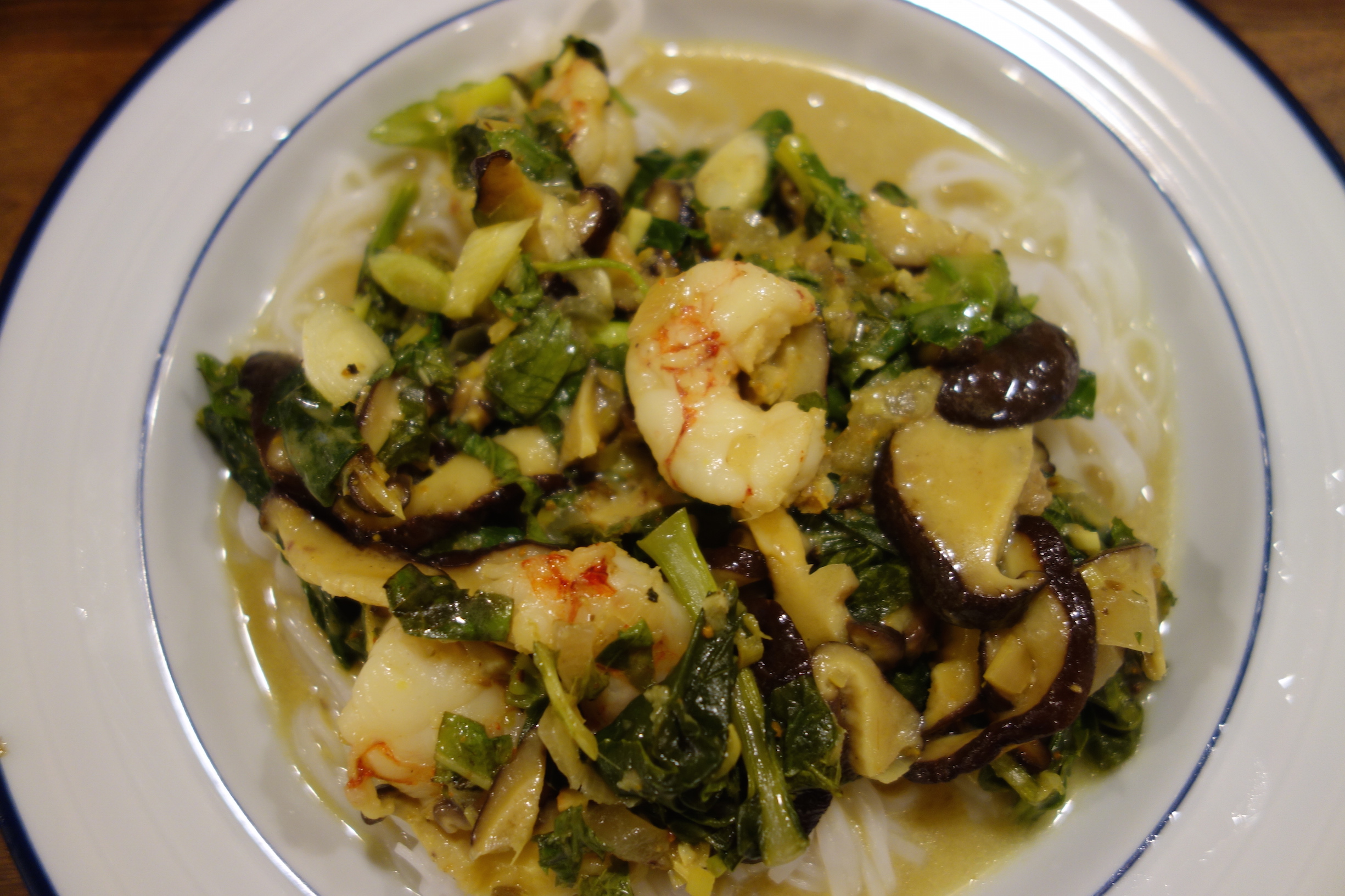 Toast the spices in a dry cast iron pan on medium heat until fragrant and grind in a spice mill. Keep aside.

Dip the noodles briefly in hot water, drain and add some to each serving bowl. Top with the shrimp curry and serve warm.

This dish is worth reposting. I used the recipe this past weekend for a dinner party I was having. I thought it would be fun to post the dishes I made… next time you want to have a dinner party and cook Indian food- you may want to use this menu…I changed it up a bit by adding sliced onions- made it super delicious…

This dish is truly delicious! I made it the other day- concocted it in my head the day before I was supposed to cook and take it to my friend’s house.

She was having a get together and wanted to know where to get a few meat snacks for a cocktail party. I suggested we cook at home instead. It is so hard to find a place that makes and delivers yummy food. Also, by the time they bring the food over, it’s cooked and cold and doesn’t taste the same reheated. We decided I will cook the shrimp and take to her house. I decided to do a stir fry style dish which will taste good room temperature as shrimp is not so tasty reheated.

There used to be a South Indian restaurant in Edison, NJ that served delicious seafood. We would go once in a while and make it a point to order a shrimp stir fry for appetizer. It was yum! It had cumin and fennel seeds amongst other ingredients. I started to think of that dish and got inspired to make the coconut shrimp.

I roasted the cumin and fennel seeds and powdered them in a spice grinder. I also had fresh frozen shredded coconut which I roasted as well- just to give it more of a crunch in the dish. Store bought, packaged coconut can be substituted for the dish.

The overall flavor was enhanced by the marinade- which was simply lemon juice, garlic, salt and olive oil. I sauteed the marinated shrimp with the spice mix and added the coconut. Very simple, yet very tasty.

It was a big hit at the party. This dish will definitely be part of my repertoire going forward. Give it a try- you won’t be disappointed!
END_OF_DOCUMENT_TOKEN_TO_BE_REPLACED