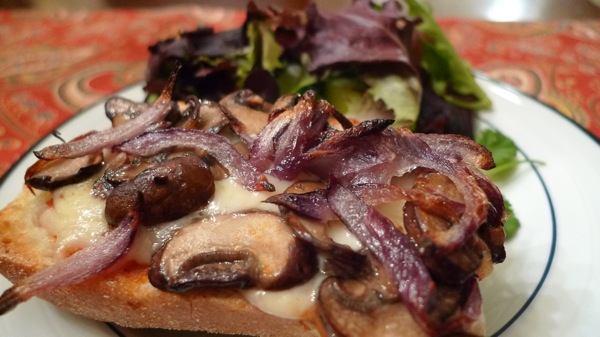 I was watching food television the other day- yes, I tend to do that a lot- and someone was making a French bread pizza… It brought back memories. My brother and I used to make it many years ago- I think when we first came to the States from India. We used store bought pizza sauce and a bag of pepperoni and cheese and it was fabulous!! I can still picture the tiny little kitchen in our tiny little apartment! I haven’t made a French bread pizza since then! Time to make one, I thought- so I started to picture in my mind… I wanted to use mushrooms – partly because my daughter loves them- and fontina cheese for its mild creamy flavor. I decided to also add caramelized onions for the adults only. The sauce was troubling me- I didn’t want to use the regular run-of-the-mill marinara sauce- not that there is any thing wrong with it- I wanted something different… after a lot of pondering; I came up with a roasted tomato and garlic sauce. Roasting any vegetable makes it sweet and nutty- including garlic. The mild flavor of this sauce went really well with the mushrooms, caramelized onions and the fontina cheese- overall it was a winner. The sky is the limit with the combinations you can add to this kind of pizza or for that matter, any pizza! I love the regular flat bread pizza I make at home or eat at our favorite pizzeria, but when I was eating the French bread pizza- it revoked memories of the amazing crusty bread in Paris! Just for that reason, French bread pizza is my favorite thing to eat- well, at least for now. We ate it with a fresh green salad and of course a French red wine!!!

In a medium frying pan, heat 1 tablespoon olive oil and add the sliced onion. Cook about 20 minutes on medium low heat until the onions are soft and golden brown. Keep aside. In the same pan, heat the remaining olive oil and add the sliced mushrooms. Cook on medium high heat for about 15 minutes, until all the moisture is evaporated and the mushrooms are golden brown. Sprinkle salt to taste. Keep aside.

Preheat oven on 350 degrees.
Cut the baguette in half, lengthwise. Drizzle the olive oil and spread on both sides. Spread the roasted tomato and garlic sauce. Next, add the shredded cheese followed by the mushrooms and onions. Sprinkle salt to taste. Bake for about 10 minutes and serve!