Add the garlic and salt into a mortar and pestle. Pound till the garlic and salt are mixed well. Add the cilantro and oil and pound and mix till a paste is formed (this can be done in a food processor). Spread the paste all over the shrimp and marinate for 4 to 5 hours in the refrigerator.

Heat a large wok like pan with the oil. Add the onion and garlic and sauté on medium heat for 2 minutes. Add the soba noodles and greens. Saute for another minute and add the tamari, Worcestershire sauce and sweet chili sauce. Mix well and check for seasonings.

Skewer the shrimp and broil in the oven 3 to 4 minutes on each side or till done. Careful not to over cook the shrimp. Take shrimp off the skewers and serve on top of the noodles. 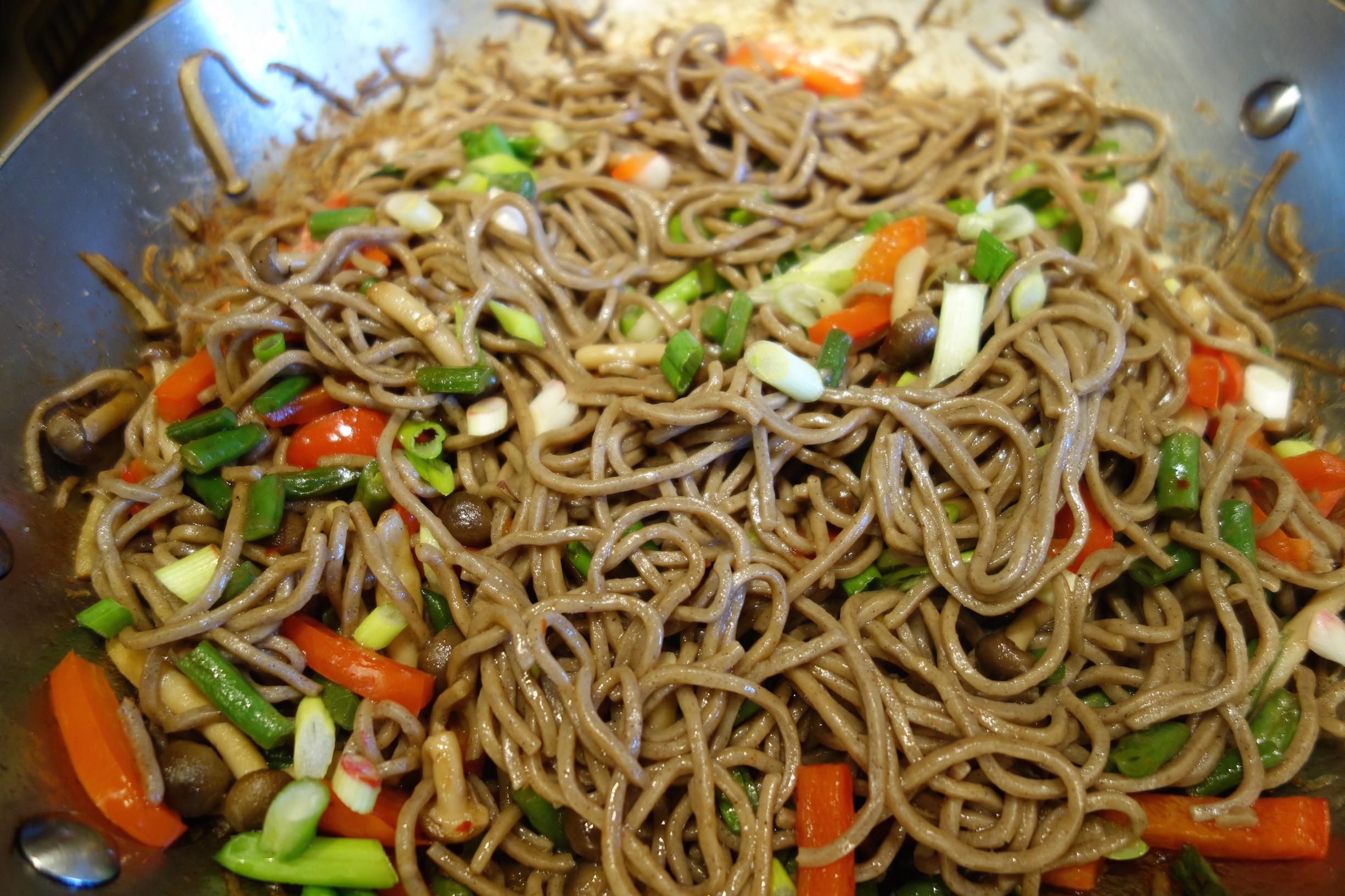 Meatless Mondays have never been yummier! These easy to make soba noodles are a crowd pleaser- no one will notice how healthy they are! I would eliminate the dashi to make it a 100% vegetarian!

Mix all the ingredients in a small bowl and keep aside.

Heat a wok like pan with the peanut oil. Add the mushrooms, green beans and red peppers and sauté on high heat for 3 to 4 minutes. Add the cooked and drained noodles and sauté for another 2 minutes. Add the sauce and bring to a boil and mix well. Taste for seasonings and add salt and pepper accordingly. Garnish with green onions and serve.

Yakisoba Noodles with Mushrooms and Cabbage 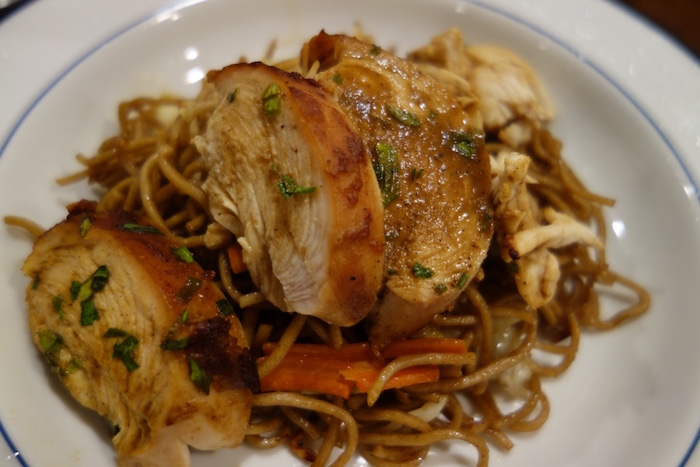 Mix the ingredients together and keep aside.

This dish is delicious. I had some lovely stew beef pieces in my freezer which I bought from Eataly in NYC. If you haven’t been to this huge space filled with delicious food- you must go. I admit, it is overpriced but there is a certain thrill about being in a place surrounded with amazing cooked food and ingredients to cook delicious foods. I love spending a few hours in there and buy fresh pasta, meat and cheese from there. A while ago I bought Prosecco jelly to be served with cheese. I was very curious to try it and it was delicious…

Anyway, I wanted to make a stew and decided on an Asian style dish. I started thinking of the spices and came up with Chinese five spice powder, a cinnamon stick and tamari for the savory component. I also chose shitake mushrooms, green onions and ginger- and also mirin. It is used in Japanese cuisine and is a sweet rice wine- it has a very distinct flavor- perfect for what I was looking for. Well, the stew was amazing. I decided to serve it with some soba noodles and sauteed Chinese broccoli.

June 15, 2010
Day four started early- we eat breakfast and left to take a nine o’clock bullet train to Kyoto. I am absolutely amazed at the train system in this city. Everything is well planned, well thought of- anything you can imagine is taken care of- a pleasure to travel if you are anal like me. I am very impressed. Did I mention how clean the bathrooms are?? Anywhere you go, from a tiny little bathroom at a train station to the one in the bullet train- spotless. I realize this is a food blog, but I thought I would mention a few things that have stood out in my mind as a traveler who does not look forward to using public bathrooms.
Speaking of food, we got to the train station early and decided to buy some snacks. We came across a department store that had a food section- which seems quite common here. The society seems to be obsessed with food… my kind of people. We bought something called rasq- which are kind of like biscotti but not as dense. If you can imagine sticks of lightly sweetened pound cake that are double baked. I grew up eating them in India- we would dip them in tea. Anyway, we bought a bag of rasq and two triangular shaped rice cakes- made of different kinds of fried rice of sorts.

Did I mention there is coffee all over the place? I was expecting tons of tea- but not coffee. There are vending machines everywhere with a variety of drinks including lots of iced coffee or cafe au lait. I bought a bottle and it was delicious. We ate the rice cakes, rasq and washed them down with the delicious coffee.

The ride to Kyoto was approximately two and half hours. We reached our hotel and decided to eat at one of the restaurants below the establishment. Soba noodles in a broth for me and a bowl of rice with egg for my husband. We finished and grabbed two French pastries from the hotel lobby- there is food everywhere in this country- amazing! We had a mango mousse and a green tea pastry-absolutely delicious. 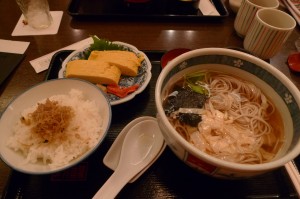 After a short break, we ventured out into Kyoto. It was raining so we stuck to the covered outdoor markets. We stopped for coffee and some green tea cake- it was all yummy. The coffee was lightly sweetened with a hint of caramel- I think I want that for breakfast tomorrow! We then moved on to a outdoor food market and sampled lots of things including fried chicken and shrimp dumplings.

We were almost full when we came across a small bar and decided to go in. As we were waiting to be seated, I saw some kind of meat being cooked on a griddle – I asked the hostess and she told me it was chili beef- I told her I wanted that. We sat down and ordered beer and chu-hi, which is a hard lemonade kind of drink- very yummy. Our beef dish came and it was absolutely delicious- very flavorful, a bit spicy but not over powering. It was a perfect end to the day. 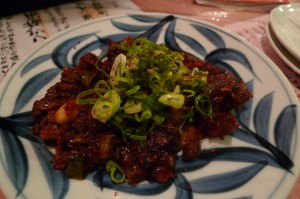 We walked back to our hotel via ‘the restaurant row’. It is narrow alley of restaurant after bar after restaurant. An amazing selection- we couldn’t believe it. The Japanese really like to eat- and eat well. We plan to be back there for a meal tomorrow- stay tuned.