This is a delicious dessert to make for the holidays!

In a small heavy saucepan, whisk together the eggs and egg yolks. Whisk in the sugar, then whisk in the citrus juices and zests. Add the butter and whisk constantly over moderately low heat until the mixture thickens, about 8 minutes; do not let it boil. Immediately strain the curd into a bowl. Press plastic wrap directly on the surface of the curd and cut 6 small steam vents in the plastic. Refrigerate the curd overnight.

Sift the flour, baking soda, cinnamon, nutmeg and salt into a medium bowl, set aside. Lightly brush a 9X5X3 inches loaf pan with butter. Preheat the oven to 350 degrees F. In a standing mixer fitted with a paddle attachment, cream the oil and sugar until light and fluffy. Gradually add one egg at a time mixing in between. Add 1 cup pumpkin puree and mix for about 5 minutes. Remove the bowl from the mixer. With a rubber spatula, mix in the flour mixture until just incorporated. Fold the batter to the prepared pan. Bake for 55 minutes or until a toothpick inserted into the center of the bread comes out clean. Cool the bread in the pan for 5 minutes before taking it out. Cool completely before serving.
Slice the bread into ½ inch slices.

Whip the cream, mascarpone cheese and sugar with an electric beater till the stiff peaks are formed while being careful not to over whip.

Assemble the trifle by starting with lining the bottom of the bowl with one part of the cake slices (divide the cake slices into three parts). Drizzle the layer with some orange juice. Divide the orange curd into three parts and spread one part onto the cake. Divide the orange segments into three piles and add the first pile onto the curd. Repeat twice more and top with the whipped cream. Garnish with a few orange slices. Chill in the fridge, preferably overnight.

I know it is not pumpkin season but these healthy muffins are still really, really good- I make them for my daughter for breakfast. They are great to have in the fridge or freezer all the time. I just take them out, cut them in half, and toast them with butter- really delicious and really good for you! A glass of milk and some berries on the side- it is a perfect breakfast!

In a large bowl, mix together the flour, oats, baking powder, baking soda, salt, cinnamon, ginger, cloves, nutmeg and sugar. In a glass bowl, melt the coconut oil and add the yogurt, milk, pumpkin puree, egg and vanilla extract. Whisk well and add to the dry ingredients. Add the walnuts and chocolate. Mix well and divide batter between the muffin cups. Bake for 15 to 18 minutes or till the toothpick comes out clean. 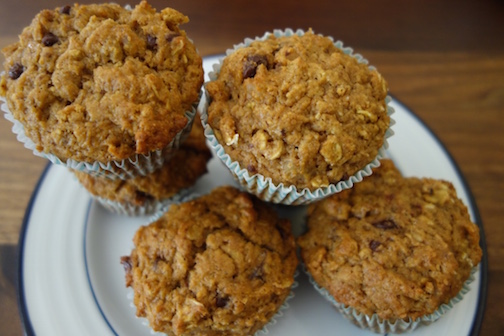 My daughter has been eating oatmeal for breakfast for many many years and then all of a sudden she announced, she was done with oatmeal and does not want to eat it again! So, I had to think about breakfast as I feel it is very important to give her a healthy start to the day. She loves anything with pumpkin flavor, especially this time of year- so I looked at a few recipes and came up with the following. These delicious muffins have whole wheat flour, oats, coconut oil, walnuts and dark chocolate. I make a batch that results in approximately 14 muffins and I am set for a while. A muffin, some fruit and a glass of milk and she is all set for the morning!!

In a large bowl, mix together the flour, oats, baking powder, baking soda, salt, cinnamon, ginger, cloves, nutmeg and sugar. In a glass bowl, melt the coconut oil and add the yogurt, milk, pumpkin puree, egg and vanilla extract. Whisk well and add to the dry ingredients. Add the walnuts and chocolate. Mix well and divide batter between the muffin cups. Bake for 15 to 18 minutes or till the toothpick comes out clean.

These are absolutely yum!

Mix the butter and sugar until fluffy in a mixer. Add the salt, vanilla extract, flour and liquor. Mix well and add the nuts and cherries.
Mix with both hands until well incorporated. Form a ball and cover with plastic wrap and refrigerate for half an hour.
Shape dough into 1-inch balls and place on the cookie sheets. Bake for 15 minutes. Let cool and roll in confectionery sugar. 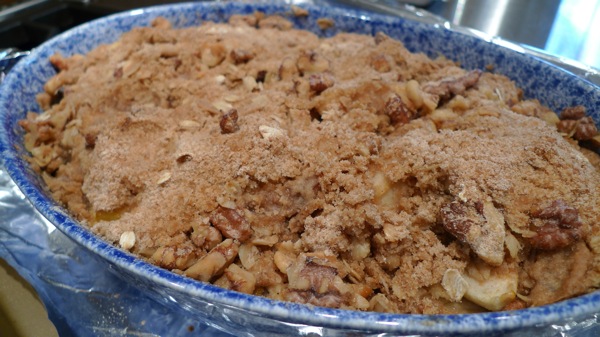 I am in the holiday/fall mood and all I want to do is cook with all the ingredients that remind me of cold weather. Apples is one of those ingredients that makes me think of  cosy evenings in my house with a cup of hot apple cider or eating a delicious hot apple crisp with some ice cream.

I made this last weekend for a dinner at a friend’s house. I used my favorite apples- honey crisp but any kind of apples can be used-whatever you like.

I used a very typical crisp topping including flour- I used my usual white whole wheat flour and oats. I paired it with walnuts and cinnamon- and butter, of course. You can’t really go wrong with any of these ingredients.

The apples are mixed with orange and lemon zests giving the filling a wonderful citrusy, fresh taste. Everyone enjoyed the dessert. I served it with pumpkin gelato- which I made a few days ago. It came out really well- if I do say so myself.

The whole combination was a very successful one. This is another great idea for Thanksgiving. I will post the gelato recipe soon.

Mix all the ingredients in a medium sized baking dish. An 8 X 8 square or an oval shaped will be fine.

In the bowl of a mixer, add the flour, sugars, and butter. Using the paddle attachment, incorporate the butter into the dry ingredients until the mixture looks mealy or crumbly. Stir in the oats and nuts.
Distribute the topping over the apples. Bake for an hour, or until the topping is golden brown and fruit is bubbling. Cool slightly and serve warm. 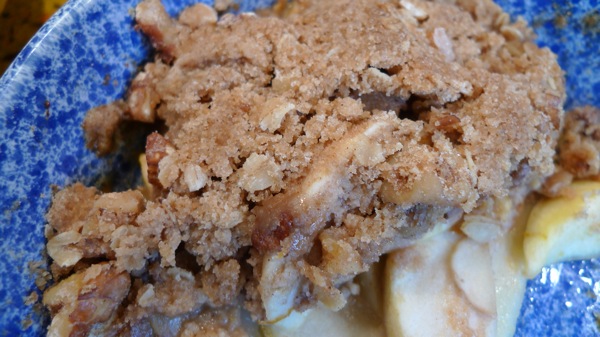 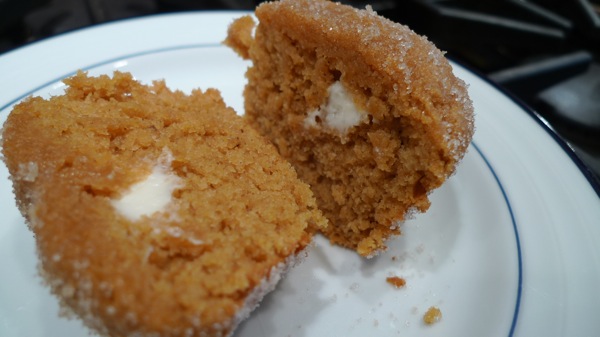 Here is another version of our favorite healthy dessert- duffins. I wanted to make something for Halloween and the first thing I think of – is pumpkin. When I think of pumpkin, cream cheese frosting comes to mind- it really is a match made in heaven.

So, in order to make duffins, I decided to invert the two and use the cream cheese as a filling in the middle.

The result was delicious- well, eventually. I made one batch and had a few friends taste test for me and give me some critical analysis. My daughter is the most honest taste tester I have- she has no qualms about telling me when things are not right. She told me the duffins didn’t have enough pumpkin flavor and the filling tasted too much like cream cheese and not like a frosting. She was right- I had forgotten to add vanilla extract in the cream cheese mixture.

The second batch included more spiced including cinnamon, ginger and cloves. It also included the missing vanilla extract. The result was delicious.

Make these for halloween…

Mix the cream cheese, sugar and vanilla. Keep aside.

Preheat oven to 350 degree F. Lightly grease a 12 muffin tin with a bit of oil in each cup.
In a large bowl, beat together sugar and egg till light and fluffy. Pour in vegetable oil, milk and pumpkin puree. Mix to combine.
In a small bowl, sift the flour, baking powder, salt, cinnamon, cloves, nutmeg and ginger. Pour into the egg mixture and stir well.
Add a quarter cup batter in each cup. Add a teaspoon of cream cheese on top. Top each cup with the rest of the batter to cover the filling.
Bake for 15 to 18 minutes, until a tester inserted into the center comes out clean.
While muffins are baking, melt butter in a small bowl. Pour ½ cup sugar into another small bowl.

Once the muffins are done, lightly brush the top with melted butter, remove from the pan and roll in the sugar, coating all parts of the duffin.

This roti is ideal for breakfast or brunch. I grew up eating it for brunch on the weekends.

The bread is made with whole wheat flour and chickpea flour. The chickpea flour gives the bread a delicious nutty flavor and has protein as well.

The two flours can be paired with onion, ginger, green onions, cilantro and a bunch of spices- sky is the limit. You can make it as spicy as you want with a lot of chilies and cayenne pepper or keep it mild.

In this case, I added coriander powder, garam masala and salt. Once the dough is made, it is important for it to rest for a bit before the bread is ready to be rolled.

Rolling the bread can be difficult so don’t worry about the shape. Roll it out into whatever shape is the easiest. Once it is rolled out, cook it on a non-stick pan (it is the easiest to handle). Cook on both sides until golden brown. You can cook longer to make the exterior crusty. Either way, the bread is delicious.

Traditionally it is served with pickles and yogurt (to alleviate the heat from the bread). It can also be served with a fried egg on top- my favorite.
END_OF_DOCUMENT_TOKEN_TO_BE_REPLACED