How can I forget watermelon when I am posting summer sides!!! This salsa is great with any grilled meat or seafood… or just plain with tortilla chips!

Mix all the ingredients together in a medium bowl. Let the salsa sit for at least an hour before serving with either tortilla chips or on top of any grilled meat or fish.

Place the tomatoes face down on a lined cookie sheet. Drizzle the oil and sprinkle salt and pepper. Roast them for 3 hours until soft. Let cool and scrape off any lose skin. Chop the tomatoes and set aside.

Transfer the vegetables to a lined cookie sheet. Drizzle the olive oil and sprinkle salt and pepper and roast for about 30 minutes. Take out and keep aside.

Heat a large frying pan with the olive oil and butter. Add the shallot and garlic. Saute on medium heat for 2 to 3 minutes. Add the tomatoes and pasta water. Bring to a boil and simmer for a minute. Add the pasta and the vegetables. Mix well and season accordingly.

Heat a medium frying pan with the olive oil. Add the breadcrumbs and garlic with the salt. Saute on medium heat, stirring constantly, making sure the breadcrumbs don’t burn. Saute for 3 to 4 minutes and keep aside and let cool. Once cool, add the parsley and cheese. Mix well and top the pasta before serving.

Transfer the garlic, oil, olive, oregano, lemon juice and salt into a mortar and pestle (or a processor). Take the paste out and add to a large zip lock bag with the chicken pieces. Marinate for 3 to 4 hours.

Line a baking sheet with aluminum foil. Add the chicken with the marinade. Add the potatoes, tomatoes, oil and salt. Mix well and bake in oven for 40 to 45 minutes till the chicken is tender and potatoes are crisp. Take out of oven and garnish with feta. Serve with roast vegetables and couscous.

Tomatoes are in season and this is a very unlikely dish.. no one thinks of stir fry when one thinks of tomatoes, well, why not!!!

Marinate the chicken pieces in the tamari, ginger, garlic, cooking wine and cornstarch for 2 to 3 hours in the fridge. Take out about half an hour before cooking. Heat a wok like pan with the oil. Add the tomatoes and the sugar and sauté on high heat for 3 to 4 minutes on high heat or till the juices come out. Add the chicken and sauté for 2 to 3 minutes.  Add chicken broth and bring to a boil and cook till chicken is cooked through. Check for seasonings and garnish with cilantro and green onions. 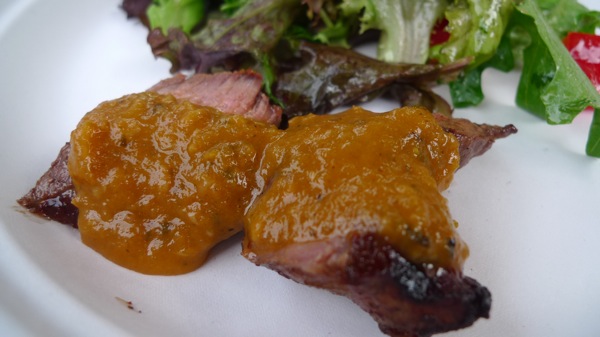 This was a new sauce I tried after reading about La Esquina’s chef and how easy his signature sauces are to make. The salsa verde was easy with tomatillos, lime juice, cilantro and avocado. It was delicious with shrimp and then yummy used in the fish and rice I made with the leftover sauce. This particular sauce used a particular kind of dried Mexican chilies I couldn’t find at the store… so, I decided to make some substitutions. I am sure the actual sauce is delicious especially since my version was yummy as well.

I recently made my way to the La Esquina brasserie and the food was unbelievable.. by far the best Mexican food I have had in New York. It is hard to get reservations but it is definitely worth it once you are able to get in there.

Anyway, I roasted poblano peppers, tomatoes, garlic, onion and paired it with raisins. It resulted in a well balanced, delicious sauce. I grilled some steak and served the delicious sauce on top- it was a big hit. I had a lot leftover and made a delicious stew.. recipe to follow…
END_OF_DOCUMENT_TOKEN_TO_BE_REPLACED 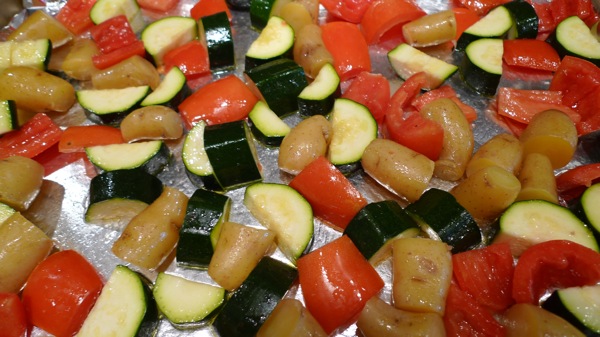 A friend was talking about an amazing dinner she had in the city at a Greek restaurant. She described the freshly grilled fish served with roast vegetables topped with feta.

The vegetable dish included potatoes, zucchini and tomatoes- roasted perfectly and topped with feta. As I heard the description, I was already envisioning it in my mind. I wanted to make the dish soon- the combination sounded amazing.

As I was cooking the shrimp bisque, I was wondering what to serve with the soup to balance it off. I thought of roasted vegetables my friend had described and decided on serving it with the soup.

I went to the farmers market and purchased fresh zucchini, fingerling potatoes and some delicious tomatoes. I cut them up and added garlic, oregano and olive oil. Once the vegetables are roasted to perfection, I added the feta. The vegetables were delicious with the oregano and feta. They were a perfect complement to the shrimp bisque. The crusty bread finished the dish off beautifully…
END_OF_DOCUMENT_TOKEN_TO_BE_REPLACED

I have wanting to make this sauce since we returned from Italy. This was one of the dishes Paola made in our kitchen at the apartment. She started by buying the most beautiful red tomatoes I have seen. The sauce itself doesn’t really have many ingredients. Good tomatoes, extra virgin olive oil (from her back yard), garlic and salt. The reason the sauce and pasta were so good- the ingredients were impeccable. My daughter who doesn’t like chunky sauces thought it was the best pasta she had ever tasted. 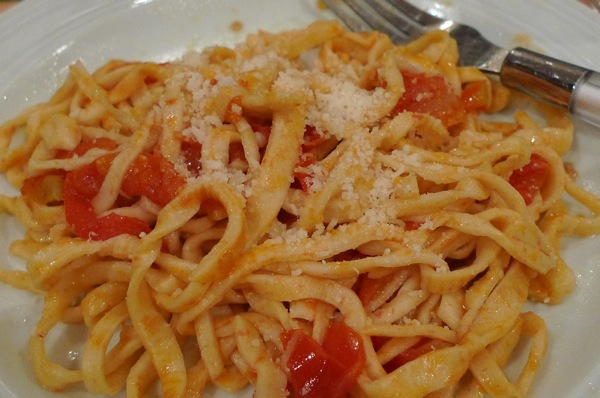 Once we got home, I started thinking how to replicate this sauce. I can’t compete with those tomatoes and the ultra fresh extra virgin olive oil. I bought a few heirloom tomatoes, some baby roma tomatoes (plum) and I had a bunch from my backyard. I cut all of them up and cooked them with olive oil and garlic. I cooked them for a while till the tomatoes began to break down and soften. Instead of serving the sauce with linguine like Paola did, I decided to buy fresh raviolis from Whole Foods- I found broccoli rabe raviolis. I was very excited about them since broccoli rabe is one of my favorite ingredients.

Since I was serving the sauce with the raviolis, I decided to smooth it out in a food mill. Once that was done, I noticed all the seeds- the sauce looked rustic and it was fine, but I decided to add another step and strained it. Out came the most luscious, delicious sauce I have ever made. It was totally worth the extra work.

The ravioli dish was a big success. Everyone really enjoyed it and there was no left over. My plan is to buy 5 or 6 pounds of heirloom tomatoes and make a big batch of tomato sauce before the season is over. I can enjoy it in the winter season and look forward to summer again!
END_OF_DOCUMENT_TOKEN_TO_BE_REPLACED