Heat a non-stick large pan with the olive oil. Add the onions and sauté on medium high heat for a minute. Add garlic and the potatoes. Add the thyme, salt and pepper. Saute on medium heat for about 10 minutes. Add the eggs and cook on a medium low heat for another 10 minutes. Top the frittata with the remaining half-cup cheese and place under a broiler on low heat. Cook till the top is golden brown- about 5 minutes (depends on the broiler heat, so keep a close eye). Take out and let sit for a few minutes. Slide out on a large platter.

Mix the arugula, olive oil, lemon juice, salt and pepper in a small bowl. Top the frittata with the salad and serve. 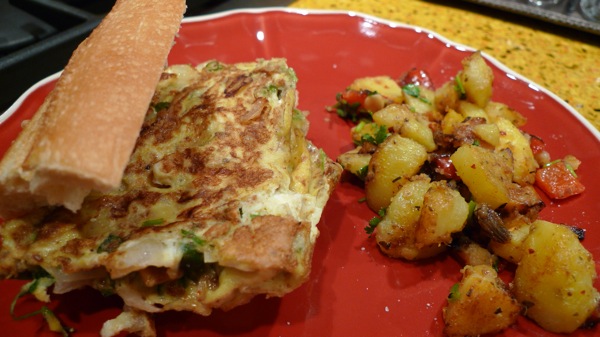 After a busy, hectic but delicious Thanksgiving weekend I am usually in the mood for ethnic food. I crave really spicy food. In fact I wanted it so much that I went to Edison and ate Indian street food to my hearts content.

The craving for spicy food prompted this particular meal. It makes a great breakfast but I made it for dinner. This Indian style omelet is served on the streets in Delhi, where I grew up. I remember going to an open market near our home and eating this with white bread. Yum- white bread is delicious and so I decided to buy a crispy baguette and make omelet sandwiches. Onions and chilies are chopped and sauteed. Eggs are beaten with fresh cilantro, salt, cayenne pepper and garam masala. I added extra cayenne in mine- yum!

While I was trying to decide what to serve with the sandwiches, home fries came to mind. While I was in school, my parents owned a deli. My Mom would make the most delicious potato home fries to serve with breakfast sandwiches. I replicated those for this meal. The home fries are quite easy to make – boiled potatoes, green or any colored peppers and the key ingredient was dried oregano. The were cooked on the griddle until crispy. At home, I made them in a cast iron skillet to ensure a nice golden brown color and even cooking.

The whole meal turned out really delicious. I made a cheese omelet for my daughter as she is not into the spicy egg concoctions. I gave her some veggies on the side and called it a night. I somehow didn’t feel like drinking wine with this particular meal- I guess my childhood memories didn’t include the alcoholic beverage. Although a beer or a riesling would be delicious!

Beat the eggs with salt, garam masala, cayenne pepper and cilantro and beat well. Keep aside.

2 sour dough rolls, cut in half and toasted

In a small saucepan, add the potatoes and top with cold water. Bring to a boil and simmer for 10 minutes or till the potatoes are soft.

In a non stick frying pan, add the olive oil.  Add the peppers and potatoes. Mix well and cook on medium high heat, turning once in a while so the potatoes begin to brown. Add the oregano, garlic powder, salt and cayenne pepper. Mix well and cook for another 15- 20 minutes or, till the potatoes are crispy and golden brown. Check for seasonings and sprinkle with cilantro and serve with egg sandwiches.