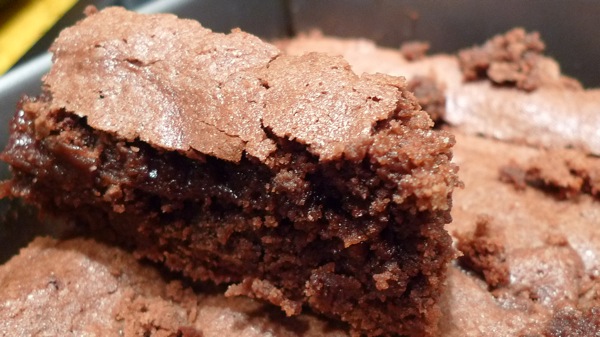 A few weeks ago I had plans to go out with some friends to the local pub. It was going to be a girls evening out and the husbands were in charge of the kids. We were supposed to leave at 5 o’clock- our neighbor offered a dinner invitation(at three o’clock) to my husband and daughter since his wife was going out to the pub with the rest of the women.  The husbands and the kids planned to grill hot dogs and hamburgers outside.  At 4 o’clock I decided to bake brownies for them to enjoy with their grilled dinner.  I was able to put this dessert together and bake it within an hour.  I have to admit- the brownies were still in the oven when I left- so I gave my husband directions to take them out of the oven in five minutes, let them cool down and then cut them into squares.  Well- he did all of that – but saw that the brownies looked kind of raw and decided to just cut the sides off to take with him next door.  He called me at the pub to inform me that the brownies didn’t come out right since they were still raw.  I came home later that evening and saw that the brownies were the perfect gooey consistency we all look for!  So, I went ahead and salvaged what was left of the mess!
These brownies are super easy to make.  I used healthy whole wheat flour and evaporated cane juice.  Both together give them a very creamy nutty flavor.  I admit there is a whole cup of melted butter- I plan to make them again and substitute a cup of extra light olive oil.  Overall they are quite healthy and extremely delicious- no reason to use a store-bought brownie mix!

In a large bowl, blend the sugar, butter, eggs and vanilla extract well. Sift the flour, baking powder, salt and cocoa powder. Slowly add the dry ingredients mixing well in between. Pour the batter into the pan and bake for 30 minutes if you like gooey brownies- a few minutes more if you like them more cake-like.